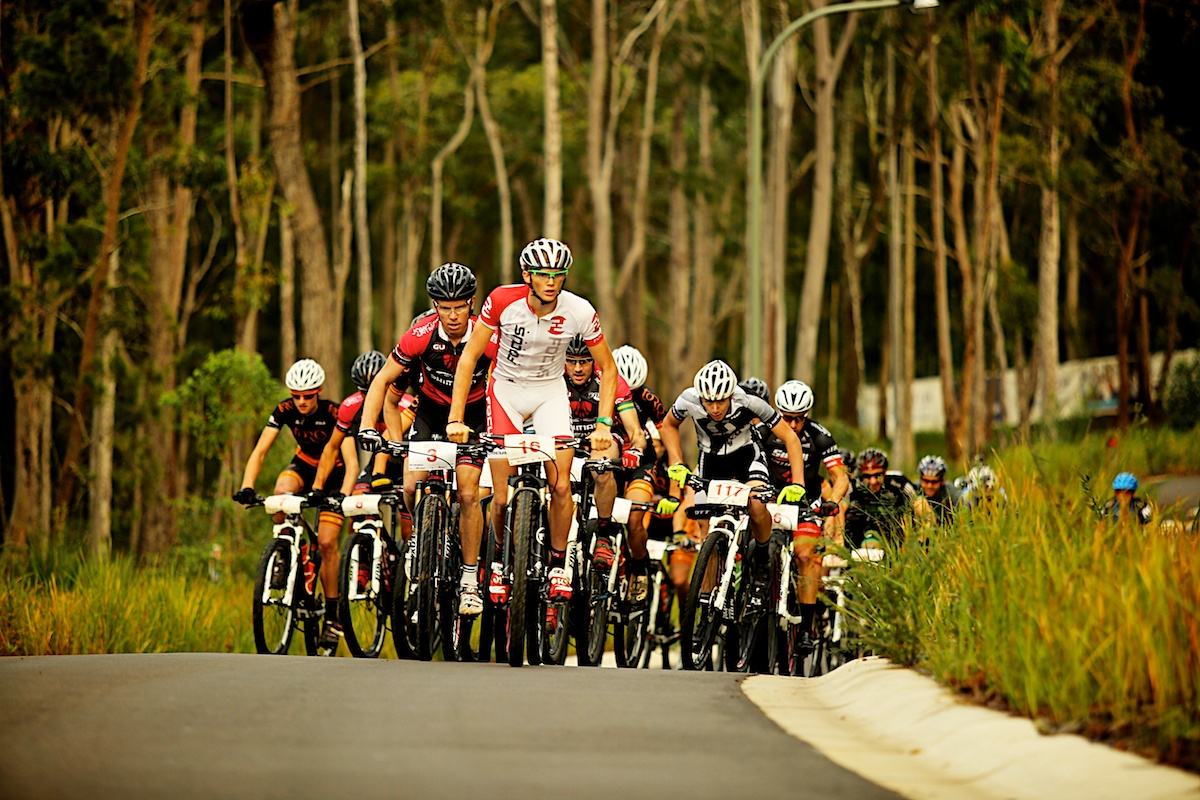 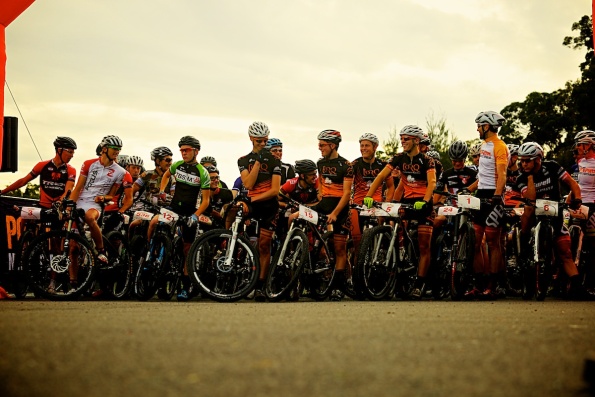 8:45am – A little bit of an earlier start to the race today and I was excited because we were going to be racing on some familiar trails from around my local area. In my warm up, I went and had a look at the climb twice, just getting the blood pumping and having a general look at the lines which would be available to get around anyone if they had any issue as staying with the front group would be paramount for later in the race when it flattened out. Lining up on the front line again and we were off. I jumped straight onto the front and followed the lead car up the early stages of the climb before it took off. I led the mass of 400 riders for the first km as I didn’t want to get stuck behind for the first climb and then get dropped from the lead group. As predicted, Andy attacked just before the steep and narrow 5oo meter section nearing the top of the climb. I followed wheels and only drifted back to 5th knowing that I would be safe there.

2km – The front group of about 20 riders headed down the hill and onto the footpath that was only meters from the lakes edge. It was quite nice but we were racing so there was no time to look at the view. The pace was still kept high and we reached the second climb of the day it was only a short 500 meters but it was steep and a little but slippery. No real gaps opened up and the group pretty much stayed together dropping a few of the slower riders.

4km – It was back onto the tarmac with a few of us riders missing the footpath and having to ride beside them along the road that was only 5 meters away. When the thick bush stopped we all hopped back onto the main path and continued on. Jason Loundes was on the front smashing the pack again as we came into Swansea to where he swung off leaving it up to me. There were a few gaps starting to form, but I rolled through at a comfortable pace trying to get someone else to go to the front. This was not the case and I sat on the front doing my thing as everyone quite happily sat behind me. Everyone was together again and I could hear Andy and Shaun talking over my shoulder as they were sitting right on my wheel. Andy was telling Shaun that there was some stairs that we would have to run up just as we were about to cross the Swansea bridge and that he was going to up the pace and see what would happen.

12km – Andy and Shaun passed me so I jumped on their wheel knowing that it was about to get fast. I had been sitting on the front for the past 5km and felt quite fine as I didn’t try to push the pace so I followed them and got off sprinting up the stair and jumping back on my bike and quickly chasing them so I didn’t get dropped. They were off and trying to get away from Chris Hamilton but he scrambled his way back and so did everyone else a few kilometers later. I found myself on the front again just before the beach section and then Andy attacked as we were going onto the beach doing over 40km/h and straight away I was the guy that went over the bars eating a lot of sand. It wasn’t an ideal time to stop and start building sand castles but who was going to stop me!

15.8km – The next two kilometer consisted of running, swimming, running, dodging fisherman and a little bit of riding when you could. I made my way around a few riders trying to catch the group ahead to where I got off the beach and started chasing the front group immediately. I couldn’t see them anymore and was by myself. Then I could see the young Torq rider Liam Jefferies up ahead looking like he was a bit tired and by himself. I caught him just before we got onto the Fernleigh Track and this was perfect timing as we could work together on the fast tarred section and use each other to get a draft and rest behind.

20km – We were on the track and rolling strong turns trying to gain any time back on the front group. We got half way up the track and could start to see them and this gave us more motivation to get back to the lead group . We chased until the start of the Glenrock trail section where we finally caught them 12km after starting to chase. Once we got there the pace seemed to have dropped and it was almost a standoff between Andy and Chris. Every time there was a chance to overtake they would both sprint trying to get into the single track first. Shaun Lead the group into the main climb of Glenrock called ‘’ Snake and Ladders’’ and this stopped Chris from having any chance of passing.

35km – They were still trying to get on the front to pick up the pace and this time Chris had made it to the front and started his attack but to his disappointment Andy was right there with him not giving and inch.

40km – We were onto the road now heading toward the finish so I decided to turn the automatic electronic lockout on in my forks. As we descended down the hill towards Merewether I unscrewed the top cap and flicked the switch on and screwed it back up knowing this would make it much easier on the smooth road. There was 4 Torq riders, 2 Swell riders and myself. The group stayed together as we navigated the footpaths and roads as little attacks were put in but immediately brought back.

46km – With about 500 meter to go everyone was playing cat and mouse and starting to ride slow, so I attacked hoping that everyone would look at each other to bring it back giving me a little gap that I needed to take the stage win, but this was not the case Andy was the first to make it back onto me and with a bit 100meters to go he came past towing Shaun and Chris with him. I managed to hold on for fourth in the end giving me my best result of the Inaugural Port to Port but just shy of a podium finish that I would love to get in front of a home crowd.

I would like to thank the event organizer and volunteers for putting on such a great event. And to all the event sponsors who without the event would not have happened. I would also like to thank my Personal Sponsor of Focus Bikes for producing such a good bike and Mum for washing and keeping my kit white each day.

Photos from FLOW MTB chech out their race report here