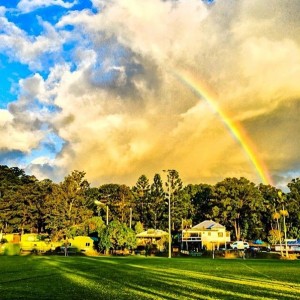 This afternoons criterium was a 40 minute plus two lap race, Contested around a street circuit consisting of many different angled corners and some steep climbs and descents. This was going to be a very fast race with some 140 NRS riders taking to the tight narrow streets to fight it out for the win.

I lined up 15 minutes early with some 40 other riders all wanting a good starting position. There is only one thing that scream out when riders are lining up this early and it that the course is going to be hard and very hairy with this any riders wanting to be at the front. We waited and then everyone scrambled to the start line where we were held for a quick photo for the event sponsors. A minute later we were off on our two neutral sighting laps. For almost all the riders this is the first time that we had the chance to ride the course on closed roads to we had to learn the course as we raced it.

The flag dropped and we were under way there was riders going everywhere trying to make up places on every possible chance. After the first few laps I started to notice that it was best if I just sat tight for the most part of the lap and ten only tried to move up the right side on the steeper part of the climb as this suited my style of riding better to move up then.

Al of a sudden there was a crash with a rider going into a tree and smashing his bike into pieces. Everyone scrambled to get around the debris and chased to close the little gap that had formed from this incident.

More laps passed and I continued to move up the peloton as riders were dropping wheels and then all of a sudden about 10 wheels ahead of me someone decided that they had enough and stopped Pedaling and a gap opened immediately with riders trying to get across to it. I made my way to the front of what was now the chasing group and then went as hard as I could up the climb trying to bridge across but this didn’t work. I started working with another rider and a few laps later we were on the back of the peloton.

I rested for a few laps and then started to move up in the same spot as before. Then down the decent I hit a rough section of road and my chain came off and got jammed against the frame. I tried to back pedal and shift up and down but couldn’t get it free so I pulled over just after the first corner and pulled it out and fed it back onto the chain ring. I walked up to the second corner and asked the commisare if I could have a lap out because he had seen the mechanical. He radioed in and got the all clear and I rejoined the race from where I left it.

There wasn’t long left in the race and my legs were on fire from suddenly stopping and not moving the blood around I struggled around the reaming laps just happy to finish at the tail end of the bunch and not come down in a crash.