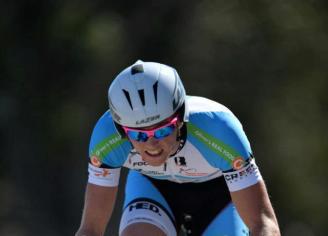 Today’s stage was an Individual Time Trial around the flat Cain Fields of Murwillumbah. With conditions starting to improve compared to previous day the wind would obviously pick up and make it a little bit harder for the later riders. With the NRS men starting at 9:25am and leaving in 30 second intervals it was going to be over an hour from the first rider to the last rider to leave the starting gate. After a bit of a bad day I was going off at 10:00am on the dot.

I started with my normal warm up getting on the bike with just under an hour to my start. It was hard to find some good long roads to warm up on as all the close ones were being used as part of the TT course so I just road along the winding hills that were around the town center. This seemed to work well giving me a few efforts and getting the legs going before the start.

1km the first km was slightly up hill with a small tail wind as we winded along some narrow streets and over a small 200meter climb. It was quite rough and if you chose a bad line you were going to lose your momentum. The next two or so kms had some sharp rough corners that lead you to the outskirts or the town and then it was all dead straight roads with 90 Degree corners to bring you back around towards the finish.

5km I could really start to feel the wind and I was slowly starting to catch the rider ahead. There wasn’t much going through my head but I would look at the speedo every so often to see if I was going anywhere near the pace of the winners and I was nowhere near!! I knew from last year that the winner averaged 48kmh and I was only doing 42kmh. This didn’t bother me and I continued on towards the finish line. I get distracted easy and I glanced over at a few lumps and bumps on the side of the road and thought how much better it would be if I had my CX or MTB bike with me so I could go do some jumps but instead I was stuck there chasing down another rider into a head wind, yer fun!!

As you may have gathered so far I’m not the best rider or the strongest but I’m one of the 140 riders that get out there and compete because I can Thanks to our sponsors. All in all it was a good training session and we still have the criteium this afternoon’s