I woke feeling excited and pumped to get onto the bike. I had all my line dialled and knew I could hit them at speed and consistently ride them without crashing. This being one of the most important parts of our sport. Looking out the window up at the mountains to see that there was no clouds meant that it was going to be a clear and rain free day.

We left the accommodation at 7:15am for a race start of 9 leaving us plenty of time in case of a mechanical issue or a flat tire prior to the start. Once arriving we were straight into a dynamic warm up that consists of push ups, squats, lunges, jumps and shuffles that get the body up and running before we even have to touch the bikes. Then we were straight into the warm up were I had to go and chase down Ian our mechanic to get him to do a last minute fine tune to the gears as they weren’t changing once I put some pressure on them. Once that issue was fixed I continued on with my normal warm-up routine.

Before I knew it I was on the start line hearing the three minute warning and taking my jacket off and giving it to the coach.15 seconds to go. BANG the gun geos. Everyone was sprinting and then on the right hand side there was a crash with a lot of people getting caught behind the breaks were slammed on and everyone was trying to weave their way around the bikes and riders and then 200meters later on the left side there was another one with even more riders stopped and many just riding over one of the bike that was in the rode. It’s not uncommon to have riders get their bikes run over if they don’t pick them back up fast enough.

Heading up the road to the top of the hill there was people letting gaps go in front of them left right and centre so I just kept overtaking them and tried to make up as many spots as possible. I came into the final bottleneck of the course where another person had crashed so everyone was off their bikes and jumping over the rider on the ground. I came through the start/finish of the first start loop in 60th place making up 24 places  on the first lap but this may of came back to haunt me later in the race. 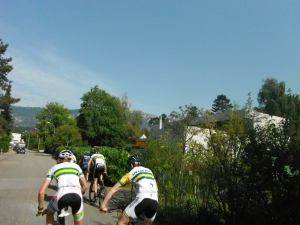 The first real loop of the course had started and there was five more to go and it was all single file up the first Rooty climb as all riders were reaching there max heart rates they started to make stupid mistake and putting a foot on the ground causing ciaos for the riders behind. The first drop off into the woods was not very hard but rider stoped at the top meaning that I was off and running again having to try and pass at any opportunity I could get.

I came through the first full lap in about 60th place again but the legs were really starting to suffer from the stop start of the crashes on the start loop. I pressed on holding the wheel in front and trying not to blow up but towards the end of the 2ND lap was starting to lose my form and posture on the bike up the climb. I noticed I was losing the battle with fatigue so I just sat in and recovered and made sure I had a gel and drunk the whole bottle in the lap. I came through finishing that lap in about 67th place losing some positions trying to make sure that I would have enough fuel to last the distance.

The 3rd lap was good for me as I managed to eat and drink as well as get the heart rate a bit lower on the decent of the previous lap. I got into a rhythm and started to close the gap on the second climb of the lap as three riders passed me when I made one small mistake on a root and slipped my wheel losing speed and most importantly places. I chased the group down and was just off the back of them but the start of the 4th lap and tried to catch them. A few more riders when past me on the open section so I got on their wheel and got towed back into the group and then managed to pass the other riders back where  we were pulled because of being at risk of 80% by the leader and friend from New Zealand Anton Cooper. So in true sportsman fashion I got my breath back and a few minutes later Anton comes along about to finish so I gave him the biggest celebration cheer to congratulate him as he rode on to become the 2012 U19 World Champion.

I was not too happy with the result of 70th but I could do no more given the circumstances and starting position. But that was all the legs had on the day and that’s all you can do.