So last weekend myself and the rest of the NKC-Lexus cycling team headed off to Bathurst to compete in the NSW hill climb champs, Bathurst Elite Criterium and the inaugeral 160km V2B.

It was the Sunday morning and we knew something big was going to go up the road and that we had to be in it. The team discussed the tactics and how we would go about them in all different scenarios so if something happened we knew what to do and when to do it. We drove to the start of the 160km race with Sam and Geoff taking the bus (so we could get the car back to Bathurst). 30mins later we were parked up on the start line preparing the bike for what we knew would be one hard race. We warmed up and all done our pre-race routines knowing that each of us have a certain way that we prepare for this sort of race. We warmed up as a team because the only way we could win was if we worked as a team.

There weren’t many Five man teams that were as well prepared as ours. We had all put in the hard work and all we needed to do was show that we had. As we focused for the race Mick Curran decided he would put on a bit of a inspirational clip from YouTube just because he could. Soon enough we found ourselves on the start line all up the front and ready to go with anything that moved. We were lucky enough to get the DS Geoff a spot in the follow car convoy which payed dividend’s later. We got up the front and followed attacks from the GPM rider playing on the defence as they would of expected. I made my way up the front about 20km in and a all of a sudden I got a flat on the rear. I threw the right hand up to get the spare rear wheel but the bunch was single file so it took almost one minuet to get to the back and stoped. Geoff arrived and I had already grabbed the spare rear wheel out of the front seat before he had even stopped the car and I was on my way in no time.

I caught back up about 3km later moving through the follow cars in the convoy one by one and the moved straight up the bunch to where Sam, Mick and Johno where and was told to move up the front immediately 300meter later there was a crash on a tight corner about ten bike behind and all I heard was a lot or breaks slamming on and some not so kind words coming from those involved. A few kms later I was off the front with Johno and then realed back in which then probably to the surprise of the GPM riders. Sam Layzell put in and attack and took some rider with him. This was a solid move and mick knew it was the winning one so when guy brown (now a NKC-Lexus teammate) when mick went with him and bridged the gap just before the 40km mark as we passed through Blaney to go toward Bathurst. Dane Crawford and myself just had to sit in the bunch and all I had to do was make sure Dane was fed and reassure him that he still looked tanned and toned. A few guys tried to get organised and tried to bring the break back but is too little too late and the final climb was coming up. My job was to make sure that Dane made it over the top in the front bunch so I sat on the front and kept the tempo consistent and slowly brought back any attacks. Dane made it over the climb in fifth and I was sixth. I noticed that there was a lot of people hurting so I told Dane to get to the front on the decent and start to tempo it for a while a few kms later there was only about 20 riders left and I decided to attach with another rider but that was brought back in after 6kms. The final climb into the park having  already run over a dog and one guy that had crashed in front of me so I couldn’t get any worse but the rest of the boys sealed the deal with mick wining The first ever 160km V2B Sam taking the KOM and Dane taking out the bunch kick. Johno done his duties in the breakaway all day pulling strong turns formic and Sam and I helped Dane take the bunch sprint which garbed us The team classification as well. 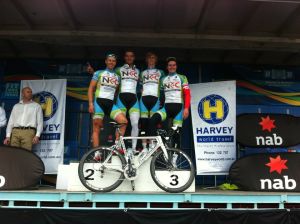