As part of the selection process for the junior team to be selected to go to these years’ world championships we were all invited to a development camp that was based out of Rotorua in New Zealand. This camp was made up of two premier New Zealand road tours MTB training and skill building in the week between them. There was a team of eight riders nominated to compete in the road tours and we were all part of the junior long team.

The first road tour was the Te Awamutu 3 day tour held near Hamilton which was about an hour and a half’s drive from Rotorua with the first stage being a 9.6KM individual time trial. The majority of the team only had their normal road bike but i decided to bring a set of TT bars because I found that i could ride faster for longer with them on my bike and believed that it would make the small difference in the end result. I started out strong into the head wind and increased my speed on the return leg with the majority of the course being flat I could get up to 49km/h and hold that to the line. My average speed was 43.3km/h and finished the stage in 24th 1:11 down on the leader.

The 2nd stage was a 104km road race that consisted of five solid climbs to the top of a berg were KOM points were up for grabs. Feeling recovered from yesterdays ITT I was ready to race and hit the climbs at full throttle. The first lap passed as I made my way to the front of the group and i start to swap off turn as my legs warmed up and then on the KOM for the second lap i attacked with another rider over the top of the climb leaving the Peloton behind. We both started the decent with a small gap but tried to make it bigger and cross to the one man break up the road. I was going down the hill and cold feel something funny with my back wheel and then I could hear the hissing sound of air rushing out of my tire. I got a spare wheel that was a campagnolo wheel and I couldn’t change gears as the cassette somehow broke the rear shifter so I had to chase the bunch only using my big and little chain rings for the reaming 50km. This left me 20:40seconds down on the leader and completely out of contention for GC and KOM. 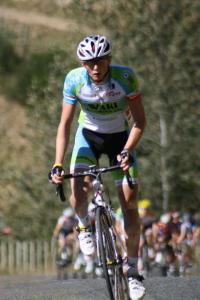 The third and final stage I was more ready to put in my attack than ever before with only getting to race the hill twice with the peloton I wanted to put some hurt in the other competitor legs. The first climb 6km into the stage I went from the back of the bunch to the front on about 20m and started to lift the pace to try and get rid of any struggling rider so that I could then see who was ready to race hard .It soon became obvious of the main contenders and I was working on were the lull in the pace was on the multi lap course so I could try and slip away in a break away. Lap three of four cam around and on the back straight that when t for about 10km I tried with another two to try and get away on the decent and onto the flat roads ahead. I swapped of turns with two other riders and closed the gap to the leading break by over one minute until the bunch finally got organised and started to slowly reel us three back in. The final lap cam and i positioned myself to stay up the front of the bunch until the last few kilometres were I started to feel the previous days efforts and tried to hold the chase bunch till the finish I tried to contend the sprint and finished in 6th in our bunch and 15th over all on the stage only 2:18min sown on the leaders.

The final GC standing was that I was 23:36sec down on the leader after 6:10:46min of racing for the entire tour. I am hoping to do better in the next tour and would like to try and win one of the four stages at the next tour in Rotorua next weekend