Last weekend the NKC-Lexus Cycling team (formally known as Waki-Lexus) headed up to Armidale to race the 9th edition of the Armidale Autumn Festival Criterium. This year we were there to defend our teams title that we had gained the year before.

We headed out of Newcastle with just four riders Sam, Dane, Mick and myself knowing that we had two very solid sprinters and some work horses. As we drove up and over the Nowendock ranges as the rain started to fall but we were optimistic that it was only the clouds that were stick on the mountain causing the rainfall. We drove down the other side and the sun begun to shine through the thick grey clouds. We stopped every 2 hours so that were would stretch our legs and grab a bite to eat. The final stop was at Uralla that was about 25km from the apartments in Armidale where Sam and I would ride in whilst Dane and Mick would go check in and then meet us in town.

On the long road to Armidale Sam and Myself decided to do some efforts just to get the legs pumping and a few mins in the sound that know cyclist likes to hear appeared from my front wheel. So quickly I changed the tube and we were off again. Soon I became dark and we could not see anything but lucky I still had my red Flashing safety light. We meet Dane and Mick about 5km from the edge of town and all rode into a little pizza shop to have dinner. After Tea we all whet back to the apartments to stretch, shower and talk tactics for the race the next day. 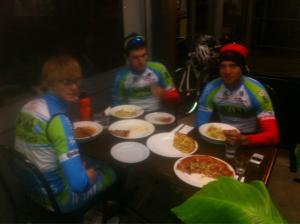 It was the morning of the race and i woke at 7am ready and excited to race with my road team for the first time this season. All my bottles were made with my bike ready to go and my cloths laid out ready for me to put them on. I showered and got changed into all my warm riding kit as it was about 10 degrees outside. Mick walks back in from his early morning ride by himself that none of us knew about and then we were all ready to leave for breakfast at about 8am.

We all headed down as a team to get breakfast from a local café on the start line and watch the earlier racing going on around the town centre. B y about 9 we were heading back up to the apartment to put our HED race wheels on the Cannondale race bikes  and from there took our spare wheels and other race food and recovery drinks down to the race site where we signed on and started our warm up. We rode some laps of the course trying to overtake each other a different area on the circuit so that we would know where we could overtake and pass people.

By 11am we found our self lining up down t the road from the start line being called up in our respective teams. I felt calm and ready to race knowing that we were strong and fit enough to win the teams classification. We rolled up to the start line and threw off our long sleeve jackets where people were immediately ready to hold them for us whilst we raced.

11:05 the race started and it was on everyone wanted to be on the front or of the front in the breakaway. There was pushing shoving and no one was giving any room because it was too hard to make up any lost ground around this circuit. Almost half the field including myself had some sort of attempt at getting a breakaway started off the front of the main bunch.

With small breaks starting to form as but not lasting you could see the fatigue starting to set in on some of the riders as they started to make mistakes and couldn’t corner properly. 23 minutes in and there was a crash involving only one rider but fellow team mate Dane Crawford was stuck behind so i eased up to check that he was getting back into the bunch only a few ,minutes earlier team captain Mick Curran had put in the strongest attack  that anyone had seen yet and that managed to establish a four man breakaway off the front about 20 second ahead of the main bunch. This gap was large enough to put them out of sight after the crash and there for the bunch started to ease up as they tried but couldn’t catch the leading few. Mick pushed the pace in the break taking out the first two sprint primes and hurting the legs of his fellow breakaway companions. About 30 minutes in the chasing pack broke into two groups with Dane and myself in the front pack and Sam in the second pack. The groups didn’t come back to gather again leaving myself to help Dane win the bunch kick for 4th.Mick Curran Placed second in a very tight sprint finish that placed the NKC-Lexus team on the top step of the podium for the second year running.

After the race we headed back to the apartment to shower and get changed were we decide to go out for lunch before we started the trip home. All up it was a successful weekend of racing for the Newcastle based NKC-Lexus team and we are looking forward to defending the teams title at next year’s Tenth annual Armidale Autumn Criterium Festival 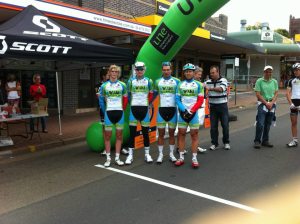